Well here it is, folks-- the blockbuster some of you have been waiting for. After hours of  study and many false starts and dead ends, I finally arrived at what I believed to be a  credible theory about who  Isaac of Canaan was. Or rather, who his father was.  And if my theory was correct, Isaac of Canaan was a direct descendant of Thomas Lawrence, one of the Three Brothers on the Eastchester Pedigree!

The first thing I did was write to Nancy Somers, who along with my Uncle Ed, had done a considerable amount of research on the Somers family, including some research on the Lawrences. In fact I was surprised to learn that she and Uncle Ed had once made a visit to Long Island to meet Helen Lawrence!

So I wanted to pass my theory by them to see what they thought. As it turned out, although I had done most of the footwork, it was Nancy who provided the key to solving the puzzle, when she pointed me to the Haley Central web site. But I'm getting ahead of myself. First let me review my conjecture. In a nutshell this is the theory that I presented to Nancy:

In the above lineage I had already determined that our "missing link" could not have been Isaac 1687, who fathered a different line of Lawrences, but theorized that it could be either his brother Jacob, who "had descendants living at Westchester", or his brother John. Since I could find no mention of John having any descendants, I settled on Jacob. The dates were right for Jacob to have been Isaac's father and he lived in the Westchester area and was said to have issue. If I was correct, then going backward, Isaac's grandfather would have been Isaac Lawrence 1666, which would have led back to a direct (proven) link to Thomas Lawrence, the youngest of the Three Brothers.

Excited by the possibility, I sent my conjecture to Nancy. And her reply provided me with the key needed to solve this puzzle: the Haley Central web site. It was here that I finally found what I had been looking for: documentation that verified  the conclusion I had already come to, but... with a twist: it was John, not his brother Jacob, who turned out to be the father of Isaac!

Here is the pedigree that I found on Haley Central: 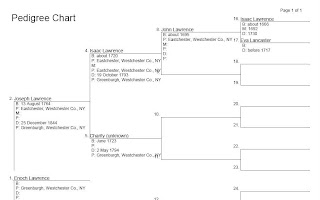 And here is the Descendancy Report for Isaac Lawrence from the Haley Central site:
http://somersfamily.net/Lawrence/pgv_report_descendancy.pdf


To make things a bit clearer, here's what it shows in a nut shell: