Prior to this, I knew very little about the Lawrence side of the family. I knew that I had a great-grandmother that was a Lawrence, but little else. In spite of the fact that we had scads of pictures and newspaper clippings on Arthur Sylvester Somers, who had been a prominent Brooklynite, we had practically nothing on the lady who had been his wife, Virginia Augusta Lawrence. I called her  the mystery woman!

Now it was time to learn more about the Lawrence side of the family, so I was excited to  I received the 21-page Lawrence pedigree that had been written out in longhand by Helen Evers Lawrence, wife of Dr. Andrew Lawrence of Seacliff, NY.

I had heard the lore of Isaac Lawrence who ran the Lawrence Tavern during Revolutionary times in Canaan, Connecticut. We used to believe we were
descended from him, and even visited Canaan, Ct. and took pictures of the old tavern which is still there, and of the doorstep, in which the names of his wife and  eleven children are carved.

Helen's document took us as far back as "Isaac of Canaan". This must have been the same Isaac who ran the Lawrence Tavern in Canaan, right? Wrong!!! It turned out that the names of his wife and children differed from the names of our Isaac's family. And so the challenge became to figure out who Isaac of Canaan really was.


Lawrence Descendancy (proven)
The first thing we had to work with was Helen's pedigree, all of which is based on historical record:
http://somersfamily.net/Lawrence/pedigree.html

That brings us up to the present day and takes us back as far as Isaac Lawrence.
born in 1719, who married Charity Fergusen, and was the original owner of the property in Eastchester that became known as The Farm.

We knew that Enoch Lawrence was the son of Joseph and the grandson of Isaac 1719, and that he married Eliza vanderVoort. Enoch and Eliza's son, Andrew Wilson Lawrence, married Ellen Virginia McCloskey, who came from Ireland. Andrew and Ellen's daughter Virginia Augusta Lawrence, was my great-grandmother. Their eldest son, Enoch Pink Lawrence, was my cousin Andrew's  great-grandfather. That made us third cousins, since we shared the same great-great-grandparents--  Enoch Lawrence and Eliza  vanderVoort.

We were able to trace our ancestry back to Isaac Lawrence, who owned the farm and married Charity Fergussen, but the question was, who came before Isaac? This turned out to be a question that was not easily answered, one that had stumped quite a few who came before me.

To add to the mix, I also got hold of (most of) the voluminous 70-page genealogy prepared by Irving "Uncle Ivy" Lawrence, which set my head a-spinning, (and I thought computer research was dizzifying!) As Aunt Nancy said, it looked like he'd included the entire telephone book of Lawrences! It's amazing that Uncle Ivy could have produced it without the help of a computer, but maybe he was channeling the ancestors! From what I could see, all the important parts dovetailed with Helen Lawrence’s pedigree, so I concluded that Uncle Ivy had been her source, and that she had had the skills to boil it down into something that was digestible in one sitting.

Then I discovered that Timothy Murphy Schratwieser, another Lawrence cousin, had prepared an Index of Individuals:

This was helpful, but corresponded with Helen's and Uncle Ivy's  pedigrees,
and thus shed no new light on the essential conundrum. 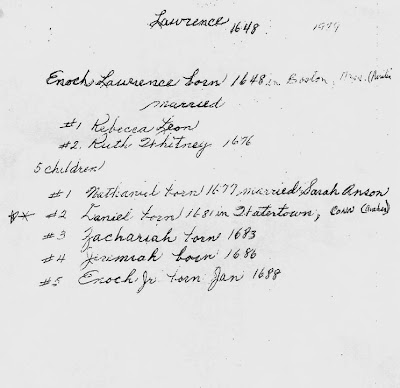 
We see that Daniel, son of  Enoch Lawrence 1648 and Ruth Whitney, has a star next to his name, which would appear to designate him as an ancestor.

Daniel Lawrence and Sarah Daniels had two sons: Daniel and Isaac.  Again, Isaac has a star by his name, indicating that he is an ancestor. According to the Lawrence pedigrees, this was the Isaac who married Charity Fergusen and owned the Lawrence homestead in Eastchester.
Isaac Lawrence of Canaan b. 1719
m. Charity Fergussen
12 children

etc.
All three pedigrees - Uncle Ivy's, Helen's and Tim Murphy's -- concur on this.

The only problem is, this was the wrong Isaac! This Isaac Lawrence was the Isaac who lived in Canaan, Connecticut, ran the Lawrence Tavern during Revolutionary times, married Lydia (not Charity) and had a different set of children!

This simple mistake was easy to make. Finding it cleared up my confusion with the Lawrence pedigrees, which was the first step toward getting at the truth and setting the record straight.

Note: I soon learned that my Uncle Ed and Aunt Nancy Somers had also noticed this discrepancy, and had conjectured that the correct ancestor might be Isaac's brother Daniel. I looked into that but was never able to verify it.

And so a mystery remained to be solved.