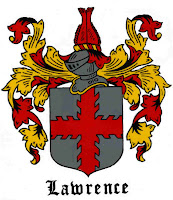 Yes, this is surely going to be controversial! Having been steeped in Irish-American tradition all my life, I am now venturing into terra incognita. In my family everything was always Irish, Irish, Irish. My father Arthur  put up a decent fight, but was overruled and outshouted by strong countervailing forces on both sides of the family -- by my Alice  Burlington, lover of all things Irish, and by his own activist  siblings -- Uncle Andy and Aunt Valerie Somers, who were both involved Irish-Americans. Andrew Lawrence Somers, a retired American judge, did remarkable work over the years, assisting the families of Irish political prisoners who were caught up in the British Injustice System. His sister Valerie always seemed to find herself in the middle of a ruckus when she ventured into Ireland. 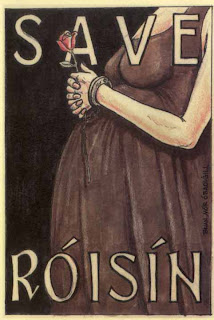 Sometimes I too found myself in the middle of Irish politics. I created the Free Róisín web page back in 1996, when republican Bernadette Devlin's pregnant daughter Róisín McAliskey was imprisoned on false charges and threatened with having to give birth chained to her bed in an English jail. Radio Free Eireann, under whose auspices I worked, initiated a worldwide campaign to free Róisín, and with the assistance of the prominent Irish human rights lawyer Gareth Peirce, she was finally freed in time to give birth to her baby!

Currently I'm maintaining the web page for Irish patriot and political prisoner, Gerry McGeough, who, in the most recent egregious example of British injustice, was convicted in a British Diplock court and is now serving time at Maghaberry Prison in Northern Island. You can read Gerry's story here: http://freegerry.com/

With all my disclaimers out of the way, I must admit that it's been quite a fun adventure discovering my English roots, which come down to me through my great-grandmother Virginia Lawrence on my father's side, and of which I had heretofore known so little. There was also a little bit o' the Irish in there, as Virginia's mother Ellen McCloskey coming from Ireland, and a smattering of Dutch, with great-great-great-grandma Eliza vanderVoort. But for now I'll be studying -- in fact scrutinizing -- the English side of the equation.

So I use the phrase "how I became English" in a somewhat teasing way, and I do hope that  Aunt Valerie will, in spite of her threats, bring herself to read this account some day, and that I won't offend - or lose - any of my Irish-Anerican Facebook friends (assuming that it's possible to un-friend on Facebook? I have no idea... as a member of the Facebook Newbie Forever club, I have trouble enough just finding my Facebook page on a consistent basis).

But now without further ado, here  is my story of Becoming English. Cheers, Dad!
Posted by occupier at 8:27 AM No comments: