Enter The Eastchester Pedigree. This  was the pedigree that was mysteriously tacked onto the end (or was it the beginning) of  Helen's pedigree, almost as an afterthought and with no explanation: 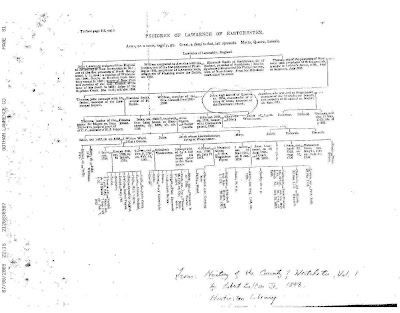 Entitled Pedigree of Lawrence Eastchester, it charted the immediate descendants of three brothers who had come over from England and settled in the New York/Long Island/Eastchester area.

I found the same chart in a book about New York history on Google Books.
As I continued to chase after leads that turned into dead ends, I became more and more fascinated with this document. The implication seemed to be that our branch was descended from one of the brothers.  If true, that would contradict
the theory that we came from Lawrences in Massachusettes.

But which one of the three brothers, and how? Few clues were provided. Nevertheless,  I was of the growing opinion that the Eastchester/Westchester lineage made more sense than the Boston lineage (although interestingly, both lines converged if you went back far enough to Lancashire, England).

I continued delving into this intriguing puzzle, seeking answers on rootsweb, ancestry.com, LDS and various other places on the web. I spent a good deal of time reading, disproving, and wheel-spinning.

I learned of another Lawrence cousin who had also challenged the notion of a Boston connection. Soon after I published Lawrence Mania, my first blog about the Lawrences, I was contacted by Frank (John Francis) Fitzpatrick), the son of Marie Lawrence Gorman, who posted a comment on my blog!

Frank sent me some tantalizing correspondence from his cousin John, who was doing research on -- of all people -- Eliza vanderVoort. Eliza was our Dutch connection, and this was exciting because Valerie and I had also been  curious about Eliza, and had found very little information available about her. We only knew that she went to visit her sister in Bergen County, New Jersey shortly before her death, and may have died there, although she was buried with her husband in Greenwood Cemetery, Brooklyn. John had been planning a trip to New Jersey to look further into Eliza, but unfortunately died before he could complete his investigation.

Also of  great interest was the fact that John was beginning to believe that the Lawrence’s had not come from New England. He was tending towards this opinion after making a research trip to Boston and apparently finding little to support the idea. Having started to come to the same conclusion myself, I was interested in hearing this, but sorry that John was no longer around to bounce ideas around with. I was on my own. 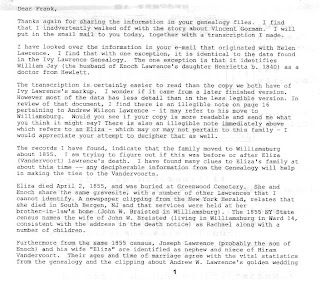 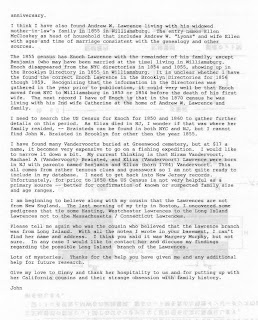 So was Isaac's father located on the Eastchester Pedigree?  Or was Isaac the son of Daniel Lawrence, and the grandson of Enoch Lawrence of Boston? Or was Isaac descended from some other so far unknown person?

Those were the questions, and  I wanted an answer!